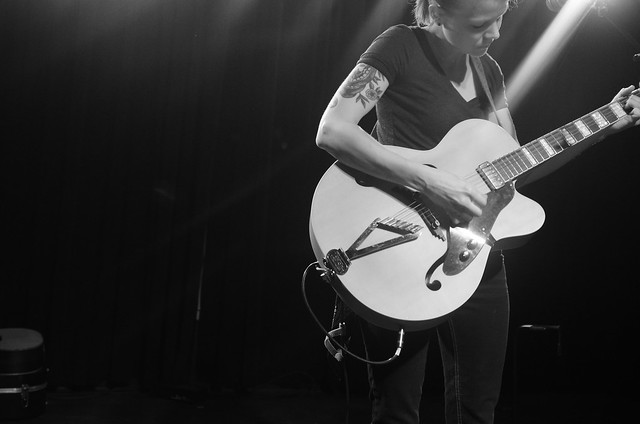 Two or three years ago, when this title was announced by Bloomsbury, I was excited, because I thought that Gina Arnold might be able to explain Exile In Guyville to me. To tell me what makes women of a particular age — say 32, because I know this record never kicked for my baby sister, who’s 30, up through about, oh, say, 45 or 50 now — what makes them love this album with abandon and devotion, 20 years later, and few of them able to explain it themselves. I can’t explain it. I just know that it marked me when I was in high school, and it’s never let go — I love Exile In Guyville as much now as I did in 1995. And she does, some:

Liz’s concerns were authentic to me and to others like me. Some of what she wrote about was simply general life experience.

Primarily, though, the majority of Arnold’s book is not an emotional reaction to this album; it’s a political one, and she does an excellent, thorough job of taking her reader through the politics of the Wicker Park music scene (the heavily male dominated scene from which Phair emerged) and through the collective reaction of critics to Guyville, calling quite a bit of it out on the carpet over the lack of feminism in the male response to the record — which is in turn some of why Phair made the album to begin with. Exile In Guyville — Arnold’s book, not the record; I’ll just go ahead and refer to the album as Guyville and the book by the full title to try and stem confusion — says a lot of things about music criticism and insular local music communities that probably should have been said when the album came out, and weren’t. It’s a fascinating political read, and it scratches some of my itch to understand why I love this record: because when I was 15, I didn’t know that I was a feminist, but I probably already was.

Arnold doesn’t let the two main groups of men who revolve around Guyville get away with much: the Rolling Stones, whose Exile On Main St is the track by track inspiration for Guyville, and the men in the Wicker Park music scene both get fairly exposed regarding their lack of feminist behavior, and Arnold isn’t wrong in that. It wasn’t, past a certain point, what I wanted to read in the book, but that’s a flaw in wanting a different book than the one Arnold wrote (that’s on me; I wanted more of a memoir, someone else’s story to compare to my own). And Arnold is not wrong when she explains the politics of Wicker Park and notes: “Acceptable roles included being fans or girlfriends of the boys in the bands, in which case their job was to support those bands quite literally — with their day jobs.”

Exile In Guyville is, like I said, a smart and thorough feminist politics book about a time two decades ago when women were just starting to make noise with their music, metaphorically speaking; Arnold nails every aspect of it, down to the chapter on the differences between the revenue streams of male and female musicians. That look, that lens, takes up the heavy majority of the book, but the gem of it is the last quarter: the quarter where Arnold steps from looking at how and where the album was fused and fired, and starts looking at the music itself. Arnold breaks down Exile in Guyville by doing exactly what she’s spent arguing the rest of the book against doing: comparing it, track by track, to Exile on Main Street.

And because she’s argued so hard about why you shouldn’t do that, when she finally does it, it works flawlessly. Frankly, it made me look at both Guyville and Exile in different ways — I put together a playlist where I cut the two records together, pairing up the songs the way that Arnold does as she discusses them, and it’s fascinating, the way that they do, in fact, parallel each other. Whether it was, as Phair has always asserted, a directly track by track conscious choice, or it was an overall idea that played out perfectly by accident, the lines are there — and I wouldn’t have found them if Arnold hadn’t written a book that is, mostly, dedicated to telling you that those aren’t the important parts of Phair’s album, or what she was doing, when and where. Gina Arnold isn’t wrong; Guyville as a record is more important than just a response to the Stones. But by taking the music out in favor of the politics for most of her book, when she gets down to brass tacks on the songs, Arnold’s book goes from interesting to shining.