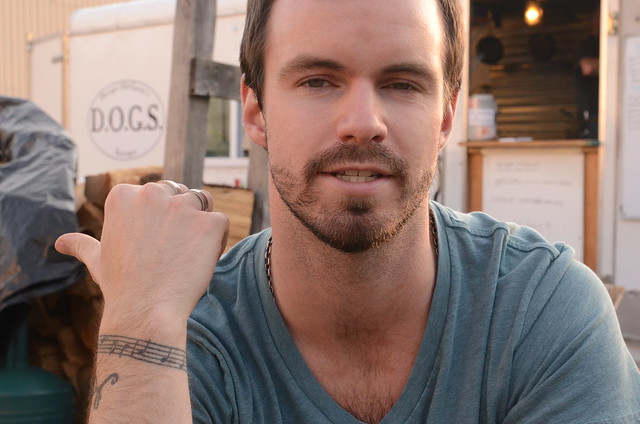 I recorded today’s two interviews with 75% of Northern Virginia rockers MELODIME back in March, at the Pisgah Brewing Company in Black Mountain, NC; one with brothers Sammy and Tyler Duis as part of my Brothers In Arms series, and solo interview with lead singer Brad Rhodes below about their latest record. Read ’em both.

BNKO: Okay! Tell me a little about the new record.

BR: Well, the new record came out October 15, so it’s been a few months since we released it. First we recorded it in Atlanta, Georgia, with this producer [Rick Biazzo], he’s done Needtobreathe, Shinedown, Charlie Mars — a lot of records that we like, which is kind of why we sought him out. And it’s — we’re proud of it. It’s kind of more a rock feel, a straight up rock feel, we kind of did away with more of the mandolins and banjos that we had, just for this particular record, because I think the songs needed that to happen. But yeah, it’s called Where The Sinners and Saints Collide, and that’s all I can think about it.

BNKO: You’re doing something with the proceeds from it …

BNKO: Tell me about that.

BR: We started a charity called Now I Play Along Too, and 100% profits from that album go into the charity, which in turn puts instruments and music education into the hands of underprivileged kids. We’ve just kind of gotten that off the ground, and we have a lot of things in the works, where we have a lot of opportunities — whether it’s one offs, or in June we’re going  to Haiti to an orphanage, the Source of Light orphanage, and delivering quite a few instruments to that orphanage, and sticking around teaching lessons and stuff.

BNKO: So it’s not just — y’all are from Virginia, right?

BR: We’re not looking past the local needs, we still want to have a part in those in the greater DC area, but we want to go international as well. Kind of wherever there’s opportunities.

BR: Well, there’s a story — we decided a while back that we wanted to do something different with the album, something more charitable, different than what other bands have done, and then after we had that idea, we heard this story about and Sam and Tyg [Sammy and Tyler Duis], our piano player and drummer’s great grandfather. He grew up in a very poor family and he had four brothers and one day somebody dropped off all these instruments on their front porch, anonymously, and they each chose one and learned how to play it and became the town musicians and were able to support their family through that. So the story goes that’s sort of how music was passed down in their family, and we wanted to continue that story, I guess.

BR: I’ve been writing probably since I was — I don’t know, 9 years old, terrible songs, and I’ll be 26 here in a couple of weeks. So I was writing a lot before I met Sam and Tyg, but we met fairly young, we were seniors in high school, and we’re coming on eight years now, as a band.

BNKO: That’s some time. Did any of you go music school or the college right, or did you just go out on the road after you graduated?

BR: We just added our new guitar player, John, in September, and he went to music school. As for the rest of us, Tyg and I spent one semester in college, that was right after the band started, and we decided to come home and take a go at this over school, which we think was the right decision, but we’re still … we’re still kicking it as hard as we can.

BNKO: How much time do you spend on the road every year?

BR: Now? Oh, man, lots. Here in the new future it’s picking up even more, but, I don’t know, I’d say we play 150 shows a year right now? But that’s probably going to be picking up. So that’s quite a bit.

BNKO: Did you get any — did your parents hand you down the music? Do you come from a musical family, too?

BR: Somewhat. My mom plays piano, and we all grew up in church, which is how we were all introduced to music, so we — I sang in choirs, I played in church bands from when I was 13, 14 years old, and I think that kind of shows, genre-wise, even if what we do isn’t Christian music … it has those undertones in it. It shows that we grew up in the worship background.

BNKO: I wouldn’t have noticed it if you hadn’t told me, but I can see it now that you’ve told me. What were some of the records from your parents’ collection that were really influential when you were a kid?

BR: I think … pretty much, every Led Zeppelin record. That’s what my dad was obsessed with, and made us be obsessed with as well. Pretty much every Elton John, every Billy Joel record — that was more of my mom’s taste, which I think has definitely influenced us. And I think that’s still what I listen to, that kind of stuff, so they did well with raising us with good classic vinyl around.

BNKO: If you had a time machine, and you could use it to go back and see any one show — either one you went to, you want to relive, one you missed, one you weren’t born for — what would it be?

BR: Oh my gosh, that is a great question.

BR: Probably … damn. I’m trying to think of, like — I don’t want to be broad, and say, like, any of these shows. I want to say a single show. I’m thinking of personal shows, too, that went terribly, that I’d want to redo, but I don’t think I’d want to do that. I think those happen and they build character. I would love to see Led Zeppelin. I have the live DVD, the Song Remains The Same DVD, and I would love to see any show on that tour, I think. I’ve already seen a lot of shit on that tour just through the DVD, so I’d probably like to see a different one, but those shows look phenomenal.

BNKO: That’s a good one. Nobody’s ever told me Zeppelin before. I’ve gotten all kinds of answers.

BR: What are the best ones that you’ve gotten?

BNKO: I’ll ask, though I usually close my siblings interviews by asking who Mom loves best.

BR: I could probably give you that answer.