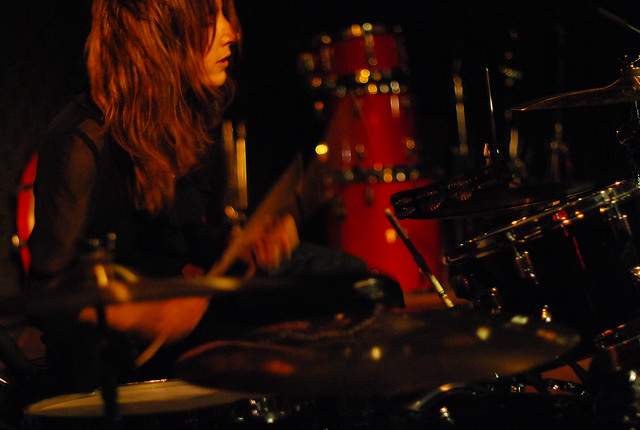 Bobby Bare Jr. — Undefeated: once a year or so, Bloodshot’s new release schedule affords me the opportunity to dig into the back catalog of one of their artists, someone I’ve never really listened to before; this year it’s Bobby Bare, Jr., and it starts with his 2014 release Undefeated. It’s a gem of a record, and I can’t compare it to any of Bare’s previous work — I have all that, happily, waiting for me this summer — but Undefeated itself is dark and scared and sad, exactly how I like my records, with just enough piss and vinegar to not drag you down; fuzzed out Verbena-esque opener “North of Alabama By Mornin'” and snarky, spitting, horn-drenched “The Big Time” let that sneaky bitter pissed-off-ness out to play in subtle ways. Bare says himself that Undefeated is less a break-up album, and more a “getting dumped” album; if you listen close, you can hear that, but what I mostly hear is a great songwriter who’s not afraid to push the genre boundaries (certainly no two songs on the album sound alike, yet they all flow beautifully between each other) and doesn’t really care what you think of him. “Don’t Wanna Know” slinks with steel and resignation; i didn’t want to know paired with please don’t go, it’s a song that can’t make up its mind — just like most people who get dumped can’t decide if they’re better off or they want you back. My favorite track on the album is probably “Blame Everybody (But Yourself)”, a song that’s half smart ass response and half gut-wrenching guitar solos and despair; it’s the kind of song I want to write when I get dumped, except for what I can’t write songs.

Dex Romweber Duo — Images 13: one of the best things about the Triangle is how many people stay here, changing and tweaking the music they make, but consistently putting out great, great records every few years, under different names or with different bands. Dex Romweber is one of those guys, and Images 13 is one of those records; it’s the best garage fuzz surf rock spaghetti western album you’ll hear in 2014. Dex’s voice over churning guitars and Sara Romweber’s furious crashing drums — it sounds like a Dex Romweber album, it makes you want to shimmy and shake your ass, and every note is perfectly placed and not one goes wrong. The best track on the record is “Sad About Us”, which is pure ’50s Buddy Holly pop joy — it has “la la”‘s! It has harmonies and chiming guitar lines! It is absolutely delightful and worth the price of the album entirely. Luckily for you, if you buy the album for that track, you get 11 other excellent tracks. And you should. (Also, any time I write about and / or go see Dex live, I am heartbroken that I have no sense of rhythm and therefore cannot be a badass fantastic drummer like Sara Romweber. Like, seriously heartbroken. She’s one of the strengths of Dex’s songwriting in this combination, and her drumming on this ranges from straightforward pop to complex instrumental noise slop. Fabulous.