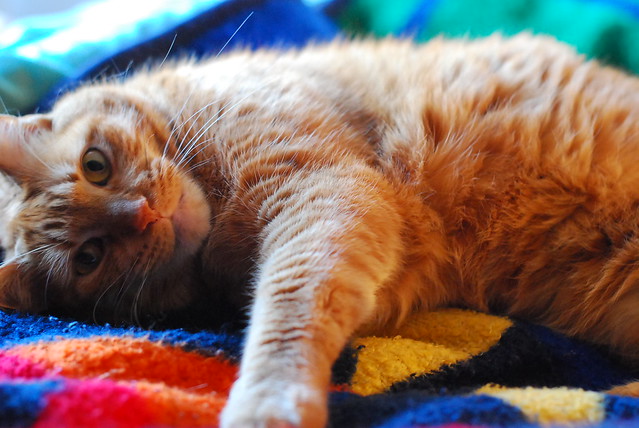 This face was my main man for the last ten years. We lived in one city, two towns, three apartments, and one house together. We took approximately 6,000 naps. He outlasted three exes. He is the only cat who ever won two NCAA basketball championships, went 18-0 in the SEC, and made $3.865 million a year, but never paid a lick of rent. He chewed holes in two pea coats, one couch, and one slipcover designed to hide the holes he chewed in the couch. He puked in the Ex’s shoes, in my bed, on every blanket we own, on nearly every square inch of the carpet in both Carrboro apartments, on the bathmat repeatedly, once memorably and disgustingly all over shep.’s bedroom floor, and gleefully and passive-aggressively whenever I went out of town. He spite pooped on the floor regularly. And in the last month, he stopped using the litterbox entirely, destroying large portions of hardwood floor in the new house.

So today we went to the vet, and it turned out that he quit using the litterbox because he was sick. Not so sick that it couldn’t be lived with, but sick enough that it would have degraded his quality of life and the quality of ours together to put him through treating it for the rest of his life; he wasn’t a young cat anymore. He couldn’t tell me that he was hurting or how bad he was hurting, but I couldn’t stand the thought that he might be hurting that bad, so I made that horrible decision that those of us who love animals often have to make. The really, really fucking hard decision.

He was a hateful, unsociable jerk, just like me. He was my best friend. I love you, Bills, and I am going to miss you so, so much.

My heart is fucking broken.