Juneau is another place I’d like to spend more time, because our time there was mostly (enjoyably!) consumed by our excursion. It’s the fifth smallest state capital in the US (which four are smaller? Keep reading!) and the only one that is not accessible by road at all – boat or plane only, and if you don’t do either, well, you’re missing Juneau, which is a shame, because it’s a really neat town.

Downtown, of course, is dominated by tourism – but also history. We didn’t do much walking around just because of timing, and that’s what I’d like to get back for. More than a block off the cruise ship dock is what I’m heading back for. (I loved our cruise, I loved that it got me in the Alaska door, and I regret nothing about going on it, but I am definitely gonna do it myself when we go back. There’s too much stuff you can’t really do without your own schedule and transportation.) The population of Juneau almost entirely lives in Mendenhall Valley, a neighborhood between downtown Juneau and the glacier, and – this is for my MIL, MJ – shops at the smallest Costco in the country.

Our excursion had a couple of parts – the first was out to Mendenhall Glacier. We didn’t splurge to actually walk on the glacier or visit the ice caves after, but we did get as close as we could without those things. And up close? The glacier still looks a little like styrofoam, okay? But it’s also damn huge. It’s melting, it’s retreating far faster than it ever should, because we have killed the planet, but it remains impressive. For now. Go see it before it disappears because humans are garbage.

(I will brook no argument on climate change being real. I mean it. I will ban your ass and if I know you personally, I may also never speak to you again.) 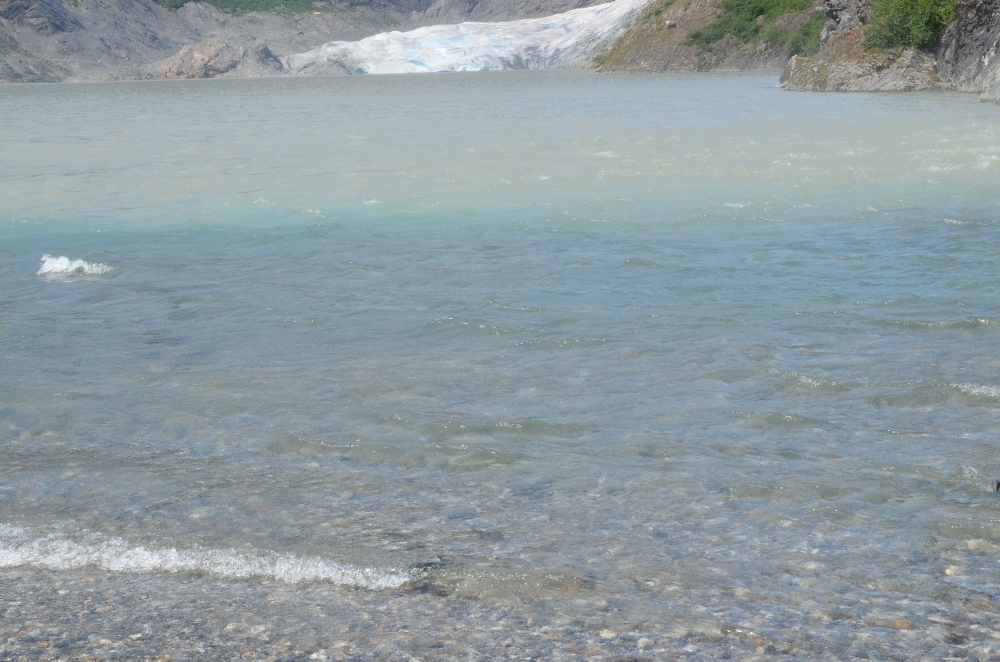 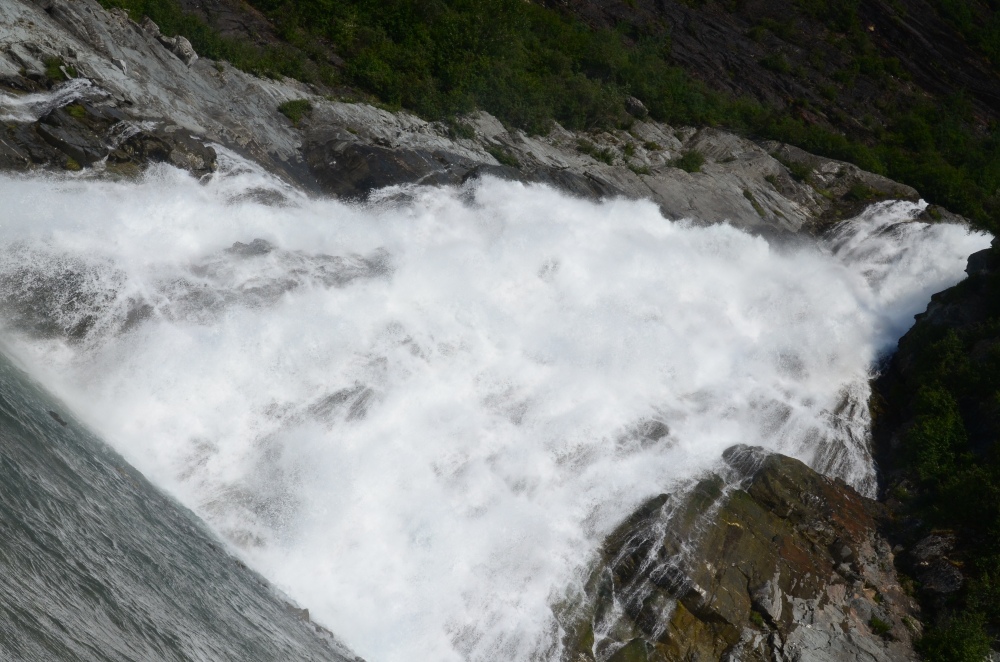 We hiked out a mile to Nugget Falls, the closest land point to Mendenhall, and it was both a gorgeous hike and a staggering end point. If I’d had a towel in my bag, I would have joined all the kiddos racing around in the shallows barefoot, because I have never been able to resist a body of water that I could possibly fall into. Instead I settled for loving the colors in the water, and the novelty to my Southern East Coast self of a dirt and rocks type beach.

We did not see a bear despite the warning that appeared to have been chewed on by bears. 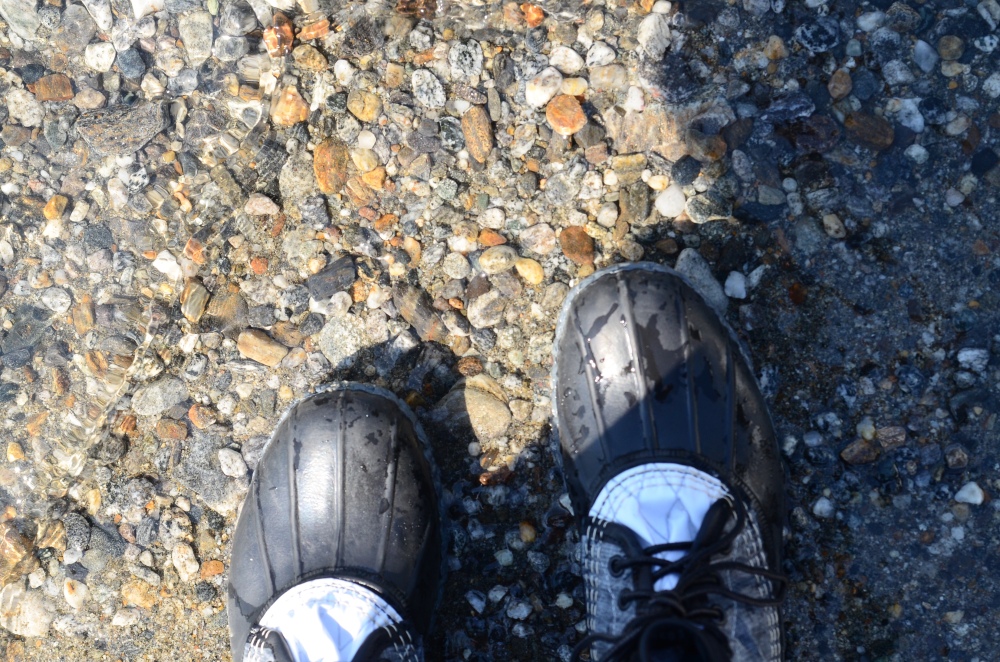 Our second stop was at a salmon hatchery; hatcheries are in the business of helping raise up the salmon population, and it was really neat. There were a damn lot of tiny salmon, and I am glad that they are being raised safely and humanely, and I also look forward to eating some of them someday.

Many baby salmons. And great light.

And our final stop was at Glacier Gardens, a gorgeous space that backs up to Tongass National Forest. It was created around a rebuilt stream that had destroyed most of the side of the mountain with a mudslide; Steve and Cindy Bowhay have owner and maintained the gardens for many years. The famous upside down gardens? Created from, ah, let’s say an unfortunate incident with Steve Bowhay and a CAT he was using to stabilize the mountainside after the mudslide. 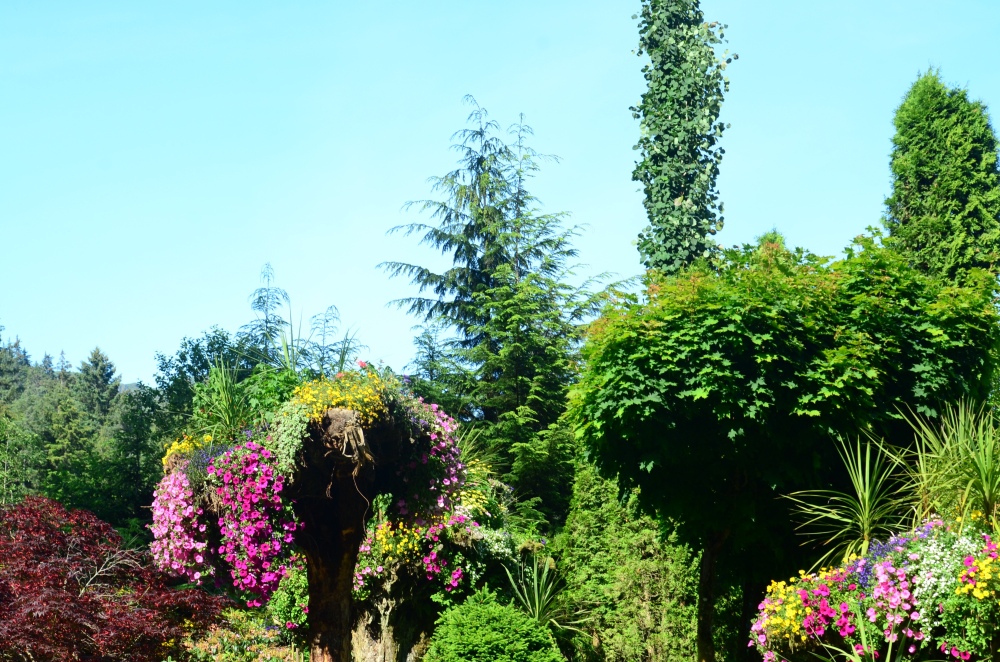 I’ve wanted to visit them for years since I first saw them on Atlas Obscura, and neither the flower towers nor the view from the top of the gardens disappointed. Am I going to plant one in our tiny front garden now? Maybe. You can’t prove anything.

We finished off the day in Juneau by having dinner at Alaskan Fish & Chips, where I ticked Alaska off the Project Heartburn list.

The four smaller state capitals? Montpelier, VT; Pierre, SD; Augusta, ME; Frankfort, KY. Of those four, I probably could have guessed Vermont and South Dakota, I had no idea that Augusta was even the capital of Maine, and I was amazed that Frankfort is that small. The more you know!