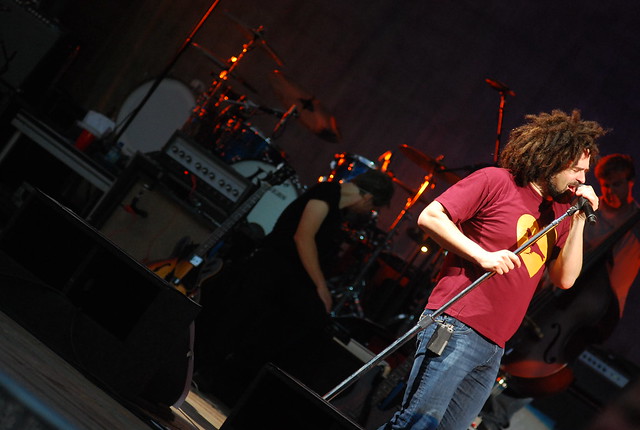 You have to understand that the Crows are, like, the most important band of my youth — of my early teens (August And Everything After) and of my early twenties (Hard Candy), at the very least. The first was formative; the second is the album that most resonates my heart with Travis, because they were a band we shared, that was a record they put out when we were in one of those really great but really hard phases. Hard Candy, in particular, though a vaguely uneven album, is one that I will always, always deeply associate with being in love with Trav when I was 22 and a dumb kid and fucking up my life by making bad decisions — the title track, and the last track (if we’re counting “Holiday In Spain” as the last track, and not the Joni Mitchell cover, which we are), those are songs that I don’t just think are “us”, we both do.

It’s a record that’s huge in our own personal mythology; Counting Crows are, for better or for worse, a band that’s huge in our personal mythology. And you don’t get to a relationship like we have, after 13 years, without a huge kind of personal mythology. That sounds like it might be bad, and I guess it could be, but for me and Trav, it’s the touchstones that help us forgive the trespasses in between the good points, if that makes sense. Like the time in 2002, when I was getting ready to make a huge mistake in my life, but at that exact moment I was in Trav’s old Volvo in Atlanta, riding around and buying a new copy of August at his record store because I’d finally worn my original copy out. Me and Trav and Adam Duritz are all tied up together in my head, and we always will be.

This is an album review, but I’ll never be able to write about Counting Crows without writing about Trav, because they’re just that intertwined.

Let’s start with this: Steven Hyden is right. It is, in fact, the Crows’ best album in 15 years, and that includes my beloved Hard Candy. But let’s also start with this: the best track on the record is the acoustic, heartbreaking “God Of Ocean Tides”, from whence comes the above line, and it is a song that’s so perfectly me and Trav that I wondered if Adam Duritz had listened to our November 2013 parking lot before the Head and the Heart show conversation. The whole album is lightning fast lyrics, which work — one place they work hard is “Dislocation”, which is perfect verses and a strange, not-quite-right one-word chorus — and work hard, but there were a million lyric pairs I twittered or wrote in my journal (just like I did in 1997 with Satellites), and that’s what I’ve always loved the Crows for. It’s full of callbacks — Elvis, Hollywood, Maria (oh, Maria) — and, like Hyden says, all over the place musically. There are rockers and there’s the gorgeous Gram Parsons-like “Cover Up The Sun”, with its twanging guitars and piano line, and the revealing lyrics (a bit too Gram Parsons-y and “Grievous Angel”, but I forgive): i left California, i was 29 years old / the world just spun me round, which is late but better than never, and might explain the terrible Saturday Nights (that, no less, dropped during a period when Trav and I were in a rough spot; metaphor via Adam Duritz!).

I had a minor meltdown at Trav when I was down in Atlanta a few weeks ago, standing on his porch, about my photography — self doubt at its best. The Crows were the first band I ever got a real press pass for, at Koka Booth, the summer of 2009. Trav and I weren’t speaking at the time. Can a band you’ve never met write the history of yourself, of you with someone else?

I think that one of the reasons that Somewere Under Wonderland works is contained entirely in “Palisades Park”, the almost nine minute opener: there’s nothing particular complex about the song, but it’s so quintessentially Counting Crows, with the spare piano opening and Adam’s voice, followed by stories about girls and stories about places that we’ve left, moments of silence between lush guitars over the chorus. Saturday Nights  was ambitious and it didn’t work. This record is ambitious, but it’s entirely ambitious within their wheelhouse, within the structures and songwriting and orchestration that they’ve always done so well. The band knows how to work within their constraints, and they know when to let Adam’s voice carry things in reverence and repetition, and they do all these things on this album.