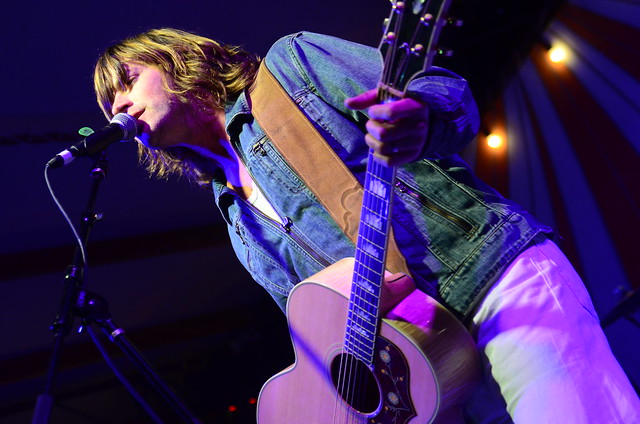 Better late opinions than never! The 97’s play the Cradle tonight, 10/8, with David Wax Museum. I’ll be in ATL with Trav, but I saw them last week at Trans Pecos in Marfa, TX, and they fucking rocked.

Much has been, is being, and will be made of every single place on Most Messed Up, the 10th studio LP from Texas rockers the Old 97’s, where frontman Rhett Miller unabashedly drops the f-bomb all over the damn place. And why not? The 97’s, while they’ve always written songs about getting messed up and having your heart broken (or maybe in the other order — check “Barrier Reef” for a hero who’s simply graduated from bad decisions on Too Far To Care to bad decisions and foul langauge on MMU), have never been ones to drop profanity. So yeah, the album is notable that way: it’s a filthy, foul-mouthed, love song to just about everything. But honestly, I think that the crux of the album is buried in the second verse of the title track, which closes the record out:

there’s only so many words you can rhyme with heart
i used ’em all up, i wrote ’em all down

Skip the chorus line that gives the track its title, even. There’s only so many words you can rhyme with heart: the first time I heard this line, I genuinely thought that it was so stupid it was profound, and the more I listened to it, the less stupid and more profound it got. It’s a fact: there are only so many words. Rhett has used them. So why not take that idea and write an album about everything else that’s left? There’s plenty of words that rhyme with fuck, after all.

And Rhett uses most of ’em on Most Messed Up, while producing what is unreservedly the best album that the 97’s have put out since 2004’s Drag It Up. It’s not that I didn’t like Blame It On Gravity — “No Baby I” is one of my top ten all time 97’s songs — and there was plenty good on both volumes of The Grand Theatre, but Most Messed Up kicks off with “Longer Than You’ve Been Alive”, and it doesn’t even take a single song to hit its stride. MMU starts already mid-stride, all 5+ minutes of “Longer” paying tribute to the life of a musician on the road with clever couplets, frank admissions, and a line that makes me laugh every time I hear it: twenty good years out of just twenty five.

It never falters, either: “Give It Time” starts a love song and ends up a “fuck off and die” song, Rhett pleading with his anonymous lover to give it time — to break your heart — and “Let’s Get Drunk & Get It On” is, despite its crude and hilarious title, a romantic ode to bad ideas that turn into good ones. Compare the choruses, from the start: let’s drink whiskey and do it all night long / let’s get drunk and get it on with song ender let’s drink champagne — and then it’s followed by “This Is The Ballad”, a gorgeous wistful Rhett love song about long distance and waiting for things to happen to you, instead of happen … uh, because of you? I guess that’s where that sentence was going? Regardless, it’s a lovely pairing of sweetness and sass, both found in both, and they play off each other incredibly well.

“Wheels Off” is a drinking-with-strangers song in the best vein of “Barrier Reef”, but record mid-point “Nashville” got the most early press, and from me, the most plays — close to 200 at the time I’m writing this. It’s furiously catchy, just over two minutes, and it’s the distilled essence of every single thing that’s great about the Old 97’s songwriting over all these years: love gone bad, the narrator running off from the trouble he’s caused, and then it all goes even further off the rails with the chorus: who’d I got to blow to get in this fuckin’ show. At its soul, “Nashville” is a great song about loneliness couched in the punk rock outlaw country fury that the last few albums have lacked, the punk rock outlaw country fury that have always made the 97’s a great band.

Part of the strength of the record is the pacing, back and forth between the rockers and the more quiet tracks, like “Wasted” following “Nashville” — it’s one of Rhett’s speak-sing songs, only minor flourishes of fuzzed out guitars under the verses and churning a little harder against the bass on the chorus: we’re better off being wasted than working our whole life through / tonight i want to get wasted with you. (Rhett does seem, on this album, to be very concerned with drinking quite a bit with his lady friend. Or maybe Murry? I like it.) “Wasted” doesn’t just pull those themes in, though, because it also pulls in “Longer Than You’ve Been Alive”: they might think i’ve wasted my life, they’re wrong. “Guadalajara” is a standard 97’s story song with surf guitars; it’s perfectly sound, but doesn’t have the weight of the first half of the album or the punch of the finishers, including Murry’s “The Ex Of All You See”, Rhett’s “Intervention”, and the title track.

Rhett, of course, has always written more than Murry, just like Patterson Hood has always written more than Mike Cooley, but it felt strange to only get one Murry track on Most Messed Up, and particularly one that doesn’t show up until track 10 out of 12, but I think “The Ex Of All You See”, besides being a fantastic title, is one of Murry’s best songwriting jobs, ever. It’s not complex, it’s not epic, but there’s something about Murry’s teeth-grinding vocals, the cliched names for cheating significant others, and the tilting, intricate rhyme of the chorus: as i am now you’ll surely be the ex of all you see. I really adore it. “Intervention” isn’t a great song, but the chorused vocals and incredibly thick guitar layers on a song about a group of people staging an intervention? It’s at the very least a clever ploy, and I fell for it.

I didn’t love either Grand Theatre volumes, though there’s track on both I adore. (Well, I just examined them, and there’s tracks on Vol 1 I adore, and there’s “Ivy” on Vol 2, so.) They felt sprawling, and they felt overdone. There was no need for two records, though that’s just my opinion, and Most Messed Up corrects that: it’s short, it’s sweet, it’s to the point, and it doesn’t miss a beat. Nobody wasted a life on the 97s taking 21 years to get to this one, for sure.