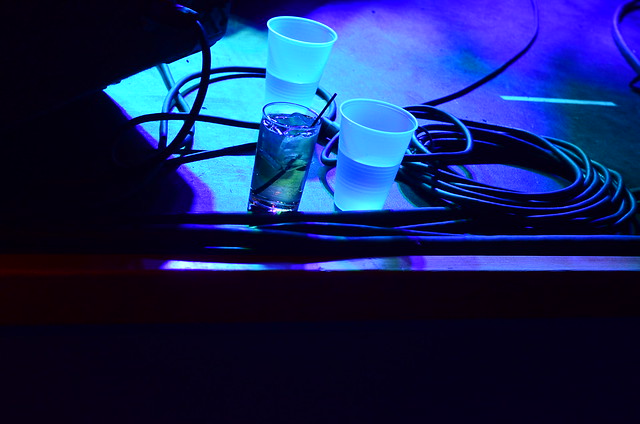 BNKO: Start with who you are, and what you play.

BNKO: Tell me a little about the band. This is your second record, right?

BH: Right. Graham and I grew up together, he’s the guitar player with the ‘fro — he and I went to high school with Phil, we all played music in high school. Not together. I went to Nashville for college, met Alex, the drummer, we started playing in a band. Phil went down to UGa and kept playing music. Phil and Graham got together one summer and Graham called me, you’ve got to come play with us, this is sweet. Then I called Alex. We all played together, and the next time we got together, we recorded an EP. We were like, we gotta record something and play shows.

We were all — Phil was living Athens, Graham was living in Chattanooga, and Alex and I were living in Athens for a good year and a half of the band’s beginning.

BNKO: Are you all in the same place now?

BH: Now we all live in Athens … we actually all live in the same house, now. In this barn.

BNKO: If you all live together, what’s the worst habit of anybody, that you’ll go on record with? Who doesn’t do the dishes?

BH: That’s so hard. How am I supposed to answer that?

BNKO: Who leaves their socks in the living?

BNKO: Do you do a lot of — some of the stuff at the back end of [Sunswimmmer] is so big. Epic.

BNKO: Does that come from living together and just putting it together on the fly?

BH: Yeah, pretty much. We live out about a mile past the Loop, which is the highway that surrounds Athens. We’re pretty close to downtown, but it’s far enough out that we’ve never gotten a noise complaint, we play until like 6 in the morning and it doesn’t matter. So we’ll go to shows, and if the stuff’s all set up, it’s like, let’s just play. We’re all jacked up on seeing music, let’s just do it. And so we wrote this new record, the first time we were able to write like that. Because the first record we were all living in different spots, so we would get together for a weekend and play a show, and then practice, and write and record demos all at the same time, and then go back to our houses and our schools and whatever.

But now that we all live together, we just sort of — jam whenever we want.

BNKO: You can hear it in the sound of the record. For as short as it is, it’s a really big record. In Athens — do you guys play with people? Give me two or three bands out of Georgia that I should be paying attention to right now, besides you guys.

BH: We just played with this band in Atlanta called Twin Studies, that totally blew my mind. They were awesome. They were great. This band, Co Co Ri Co, share members with Reptar and Giant Giants and Wild Night — all those dudes play in a lot of bands and they’re all awesome. Awesome dudes in awesome bands.

BNKO: David Barbe produced this record. How was it to work with him?

BH: It was really, really cool. We did Yard Boat with him, too. We worked pretty closely with David and the relationship started there with some good luck on our part. He was looking for a band to record because he teaches the music business class — he’s head of the music business program at UGa — and it used to be a certificate program, and now it’s a full fledged major degree. He was looking for a band to record before we did Yard Boat, before we all lived together, so you submit a demo and the class votes on who they want to record. We got lucky and got voted on to do it. It was in the middle of the week so Alex and I had to drive down and miss school and Phil was like, Dudes, it’s totally going to be worth it. I swear, it’s going to be awesome. This guy is really, really cool.

BH: Well, the instruments were three days. Phil lived there, so he could go in whenever there was some free time and do vocals here and there, and we came down for a couple of weekends and mixed it with David, too. This time, we had just signed with Normaltown before we went in, and had been talking to them for a while about that. Because we were doing it with a label, we had enough time that we were in the studio for a lot longer, three weeks or something, we could really finish writing the album in the studio. We went in with way more songs than actually ended up on it. David helped us sort of create a more streamlined vision for the album.

BNKO: It feels like one piece. Even though you have some longer songs in the beginning, and those two really punchy ones right in the middle, and then the big soundscape of the last two tracks. It all definitely really fits together, and I was impressed by that. I am notably a vocal anti-proponent of all songs over four minutes, so for me to be like — really vocal about loving these twelve minute tracks at the end of a record, that’s a really big deal for me as a music fan.

BH: That’s the whole second side of the album.

BH: It’s really — just from the name alone, it’s a pretty watery wet kind of record, and I think part of what influenced that is that — we recorded it in July, and it was the wettest July I’ve ever experienced. And it rained more when we were in the studio, in those three weeks, than it had the whole previous year. The first night we were in the studio, Graham was talking about how it was flooding in Chattanooga, because it had been raining for a couple of days.

BH: Yeah, surrounded by mountains. He was saying, it’s flooding in Chattanooga right now, we were all like sitting on couches in the lounge area, and David’s sitting across from me, and he goes, yeah, it’s flooding under your feet, too. And we look down, and there’s water coming out from under the couch. We had to get shopvacs and brooms and all that, the Drive-By Truckers’ rehearsal space is next door, and we had to go over there and borrow a shopvac to get all the water out so it wouldn’t reach the control room.

BNKO: If you had a time machine, and you could go back in time and see one show — it can also be a band on a particular tour, or an artist in a particular era — what would you go see?

BH: After my experience with this, David played in Sugar. And he toured with Sonic Youth before, and I love Sonic Youth, and it would be so awesome to see Sugar and Sonic Youth play together in, like, Japan or something. That would be so cool.