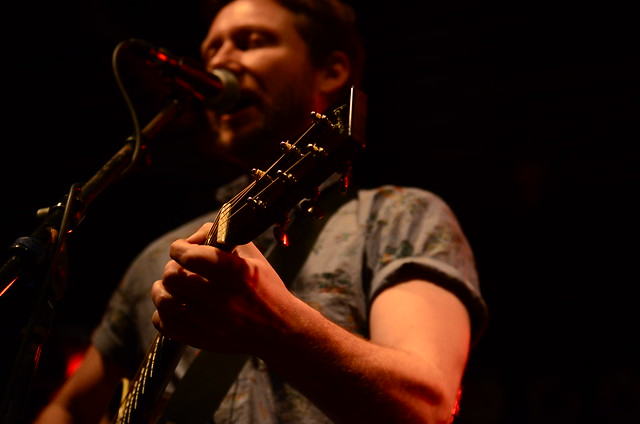 When Cory opened for Gaslight earlier this year, he told a story about a friend who occasionally covers his song “The Corner” and sings a line wrong; he sings down on the corner of what I want and what I intend to get, where the actual line is what I tend to get. They both work, but they mean totally different things. I don’t know why I’m telling you this story except that it seems somehow relevant to The No-Hit Wonder, Cory’s newest release for Bloodshot Records.

The title track opens the record, with an electric guitar driven rock and roll riff that’s not how I think of Cory’s solo acoustic shows sound; it’s a paean to doing what you love even when it never pays off:

It’s a heartbreaking song about following your faith, and it’s a redemption song about doing what you love no matter what. Cory toured and played for a long time without releasing much officially, but he’s done two records for Bloodshot in the last three years, and this feels like a confessional song in the best way. No regrets, no wistfulness, just cold hard truth turned into a perfect song.

“The Only You” follows it, with a bittersweet opening verse that’s just Cory’s voice over drums and some minimal guitar, before he launches into a gorgeous piano ballad about being with someone just to be with someone, because the only you is a person you still love, even when you’re not with them. when i get lonely, sure, she’ll do. Cory’s always written cheeky, off-kilter love songs — “Yesterday”, “A Girl Named Go”, “The Prettiest Waitress In Memphis” — that almost always have late turns in them, and “The Only You” is a gorgeous addition to that part of his catalogue.

“Sour Mash” is a another love song, this one to booze, and it twangs real damn hard; it’s a country tune through and through, two and a half minutes of Nashville electric guitar. “C’mon Shadow” could be a Randy Newman song, which I didn’t know Cory could do, but I am not surprised at all to discover that he can. Wonder is full of songs with honky tonk piano all over it, and it’s a fantastic addition to Cory’s guitar.

“Missing You Fierce” would have made me cry, except that I wrote this review on Trav’s couch, which meant that for once I wasn’t missing him. The chorus of vocals drive this lovely straight up rocker, and the fuzz of guitar on the instrumental break sounds the way that missing someone feels. “All I Got and Gone” is a gorgeous minor key laid with organ and accordion and slide guitar; an elegy for everything you’ve lost. “All The Rivers In Colorado” is another traditional country ballad, slide guitar laden, a baptism of love and loss; there’s something absolutely compelling about it that I can’t put my finger on, but it’s my favorite track on the album. (I think it’s the sha la la’s over the outro, actually. What a genuine fucking hook.)

“Daddy Was A Skywriter” is a two-step with a Louisiana flavor, mostly in the predominant melody being carried by the accordion, and it’s funny and clever without over playing the “I’m who I am because of my parents” trope that some songs that try too hard do; this song tries just hard enough and it’s a lovely moment of humor in an album that’s pretty heavy on lost love songs. “The Highway Home” is an end-of-album match to the title track, the guitars wailing under lyrics about life on the road and getting home to the person you love despite everything the world throws at you, metaphorically represented in the song by ice and snow. I absolutely adore the stripped down weariness in Cory’s voice on the acoustic guitar-only “The Meantime Blues”, but I’m pretty sure that Trav will be horrified at the line about selling a Gibson to pay the bills. Despite “blues” in the title, it’s actually a lovely little love song about domesticity with your partner and making art, and I kind of teared up a little bit.

“You Make Me” finishes it off with a blast of Memphis guitars and piano, and I kind of love the 1-2-3 closing punch of “The Highway Home”, “The Meantime Blues”, and “You Make Me” as three genuine love songs on a record that’s heavy on the broken heart in its first two thirds. It’s a delicious optimistic finish for an album that, hell, is titled after a song about not getting what you want. It’s a kickass sequence to go out on.

Cory’s always been a terrific songwriter and a killer live performer; I didn’t expect that this record would be anything less than great and it isn’t. What it is, though, is better than great. Cory’s taken his songwriting to a new level, and the variety of sounds, orchestration, is a huge step forward for him. It’s a bigger, fuller sound, it reaches for places he hasn’t gone before, and it is absolutely wonderful.

Bloodshot Records provided me with a review copy of this album, but my opinion that everything they do is amazing is all my own.